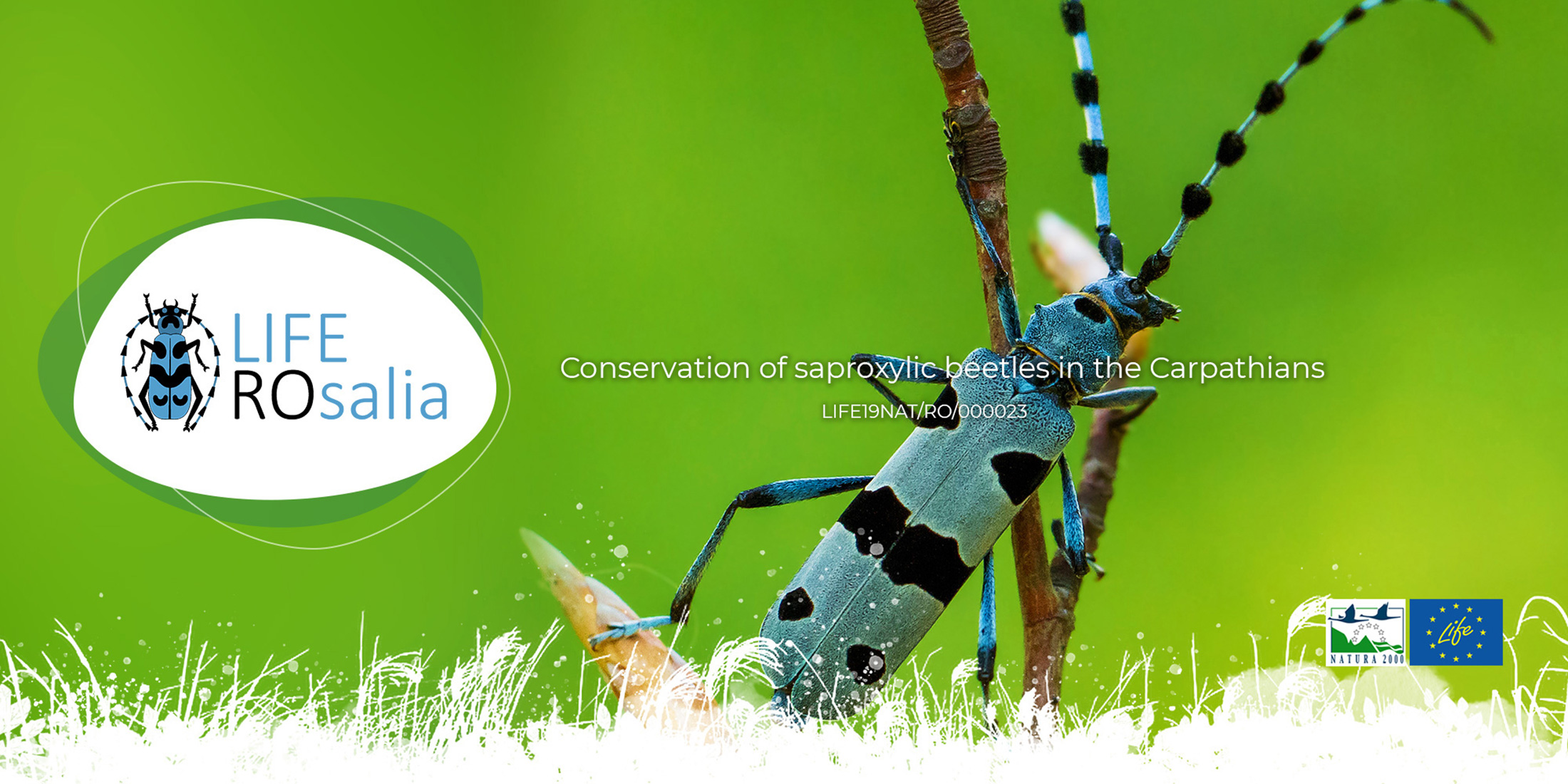 LIFE ROsalia – Conservation of saproxylic insects in the Carpathians

Romanian Carpathians are considered a hotspot of biodiversity in Europe, with large forested areas, including old-growth forests. Past forestry practices such as selective logging resulting in forest high grading, and removal of ancient or decaying trees reduced the heterogeneity of forest structure and composition. These practices lead to forest habitats with few veteran trees and a small amount of dead wood, which protected beetles such as Rosalia alpina, Osmoderma eremita, Cerambyx cerdo, Morimus funereus and Lucanus cervus rely on for completing their complex life cycles. Moreover, saproxylic species are considered pest species by traditional forestry techniques, reducing the value of timber.

Romanian forestry formal and informal practices actively seek to reduce the deadwood quantity in order to lower the presence of saproxylic species and sometimes use sanitation logging for isolating stands with a high diversity of saproxylic beetles or even applying insecticides.

The project aims at halting and reversing the loss of priority and non-priority saproxylic beetles’ populations in the Carpathians by demonstrating conservation actions for increasing the connectivity of favorable habitats in the ROSCI0208 Putna Vrancea (Eastern Carpathians, Romania) and transferring and replicating suitable actions in other Romanian Natura 2000 sites.

The project objectives are:
– to increase the connectivity between patches of old-growth forests from Romanian Carpathians by creating 22 stepping-stone habitats in Putna-Vrancea Natura 2000 site, suitable for five priority and non-priority saproxylic beetles;
– to increase the understanding of the role and ecosystem service provided by the saproxylic beetles’ communities and associated habitats for biodiversity and forest resilience and strengthening the involvement of stakeholders and the local communities in the conservation of these species in Romania;
– to update the knowledge regarding concrete conservation of priority and non-priority protected saproxylic beetles among stakeholders from the project area and Romania by actively transferring the knowledge and replicating the techniques demonstrated during the project;
– to create and legally bind a national action plan for saproxylic beetles (Rosalia alpina*, Osmoderma eremita*, Cerambyx cerdo, Morimus funereus and Lucanus cervus) as a method to unlock the use of concrete conservation of saproxylic species at the national level in the medium and long term.

To solve identified conservation issues in Punta-Vrancea ROSCI0208 and unlock the conservation of saproxylic insects in Romania we will carry out the following activities.

To ensure a smooth implementation of project activities and to comply with various legal requirements, we will carry out several preparatory activities, necessary to develop the implementation plans to the necessary level of details: A1 Detailed work plans for conservation activities (Preliminary inventory of forest structure and communities related with deadwood; Update ownership list; Produce technical plans for implementation of concrete conservation actions; Produce detailed intervention maps; Produce methodologies for monitoring concrete conservation activities; Produce a buying green guide); A2 Ex-ante survey and planning for awareness and educational activities (Questionnaires for sociologic investigation; Producing the implementation and replication strategy; Establishing the final monitoring indicators); A3 Project and regional kick-off meetings and training of team; A4 Obtaining EIA permits; A5 Action plan for target species (Studies for conservation status at RO level, elaboration of plan, public debates; legal approval); A6 Legal advising for contracts with landowners (to safeguard a 20-years sustainability). The actions will be implemented by all partners (lead by APMVN), in PVNP. The activities will be implemented within 1 year, with the exception of the action plan.

We planned a set of management actions to facilitate the technical and administrative implementation of the proposal: F1 Technical and financial project management (lead by APMVN), F2 After-LIFE, and F3 External audit. The management will be 100% controlled by APM VN (own staff).

The proposal will be implemented within the limits of ROSCI0208 Putna Vrancea (38060 ha, Eastern Carpathians, Alpine BGR).

Putna-Vrancea Natural Park was established on the basis of Government Decision 2151/2004 regarding the establishment of the protected natural area regime and Ministry of Environment Order 964/2007, regarding the establishment of sites of community importance. Government Decision 1284/2007 classifies the area as a special avifaunistic protection area – ROSPA0088 Vrancea Mountains. The Natural Park statute was obtained as a result of LIFE02NAT/RO/8576.

The Putna-Vrancea Natura 2000 site overlaps the central and northwestern sectors of the Vrancea Mountains. The site is part of the external group of Curvature Carpathians, overlapping the Putna river catchment area. The main relief units within the Putna-Vrancea Natura 2000 site are Lăcăuţi-Goru, Coza, Lepşa, and Zboina Neagră. The Lăcăuţi-Goru area unfolds on the general direction NV-SE, between Basca Mare and Zăbala rivers. The maximum elevation of the Vrancea Mountains and in Putna Basin – Goru Peak (1784.6 m) and Lăcăuţi Peak (1776.7 m). Coza Mountain extends at the north of Zboina Frumoasa and is bounded by rivers Putna at the north, Zăbala (southwest) and Năruja (southeast).

26 mai 2021
About saproxylic insects and their habitats