On October 28, the Center for Wildlife Rehabilitation – ACDB took over a three-year-old bear, seriously injured in a car accident that took place in Tulnici, Vrancea County, on the national road 2D. 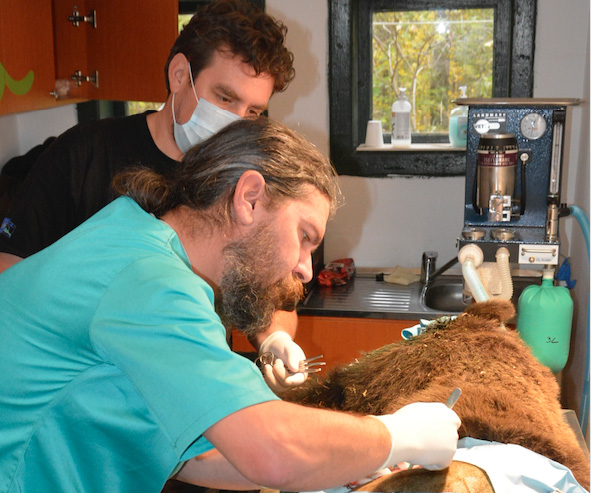 The ACDB team was contacted by the administration of the Putna Vrancea Natural Park to tranquilize the animal and take it over in order to ensure detailed medical investigations and the necessary treatment. (watch video)

Arrived at the ACDB center, the bear received all the necessary care, tests were performed, and following the medical investigations, an open wound was found in the chest area and the existence of a femoral fracture in one of the limbs.

„First, we did an x-ray, we tried to cover the whole skeleton of the animal, to see if it has other lesions. We discovered a fracture of the femur and with a plate we managed to fix it „, said Borka-Vitalis Levente, veterinarian.

The medical intervention was difficult, performed by veterinarians Vitalis Levente Borka from Vets 4 Wild, George Vlad and with the support of Lydia Tot from the Center for Wildlife Rehabilitation – ACDB. The intervention involved fixing the femoral fracture by mounting a plate and suturing the wound at the chest.

„He will need very strong postoperative treatments, antibiotics and painkillers to keep him away from the pain so that he can be cooperative, calm and the bone welding to work properly,” said George Vlad, a veterinarian doctor.

Even if the surgery was successful and the broken bone will recover, doctors say that the difficult period is only just beginning. The next few days are decisive for him, so the bear will be constantly monitored.

„The surgery was a success, but the hard part will come from now on because the animal needs to have a physical endurance to help him during the recovery period,” said Matei Dragomir, coordinator of the Wildlife Rehabilitation Center. – ACDB.

About the Center for Wildlife Rehabilitation – ACDB

ACDB started to carry out activities for the rescue of wild animals in difficulty since 2004. In 2007, ACDB set up the Center for Wildlife Rehabilitation, on the site of the former zoo in Petrești, a few kilometers from Focșani.

To date, more than 350 wild animals have been treated at the Center, with each patient having a separate story.

An impressive case is that of the bear cub named „Five Feet”. He suffered a serious accident in which he lost one of his limbs. The bear arrived at our center in serious condition, and here it received special treatment and care. With only three limbs, but energy as if it had five, the bear recovered very well from medical interventions and care, being successfully rehabilitated and released into the wild.